The closing workshop of the ENeRAG project was held between 28 February – 2 March 2022.

The aim of the final workshop of the project was to summarize the work done and to draw conclusions from the joint research results achieved during the implementation of the project.

Judit Mádl-Szőnyi, the scientific coordinator of the ENeRAG project, opened the event, after which she, as well as Ildikó Erhardt and Timea Trásy-Havril gave a summary of the activities carried out in the project and the impacts achieved in the framework of an interactive presentation. During this presentation, participants were involved in the discussed topics several times using the Wooclap application. In addition to some scientific questions about geofluids, the presenters also asked the workshop participants about the statistics obtained with activities in the project.

Moreover ELTE, UMIL and GTK representatives gave presentations of their experiences abroad (Hungary, Italy, Finland) in connection with different events (e.g.: exchanges, workshops) of the project. Here, in addition to what they have learned; it was also possible to present their free time experiences. The audience received these reports with great interest, and it was interesting and gratifying to hear how the project participants were able to develop their own research topic through these project activities.

The highlight of the workshop was when detailed introductions were given on the scientific content of the joint researches, and they were followed by fruitful conversations, from which everyone present could gain new knowledge and approaches as well. These research works were placed in the context of the Workflow (in press in Water MDPI journal) created as one of the results/outcomes of the project. The already published joint researches can be found here. 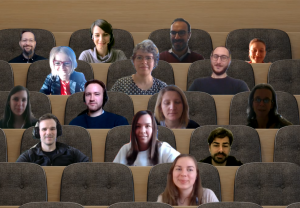 The joint research presented at the closing workshop was a good example of how knowledge transfer has taken place in the project and thus the capacity of ELTE in the field of geofluids has been strengthened.

The partners concluded that the joint work was fruitful, which they would like to continue in the future as well, in the form of further joint publications and joint proposals. Nothing proves the seriousness of further joint work better than the submission of one joint Horizon Europe proposal and one more is under preparation right now. It improved the capability of ELTE to compete successfully for EU and internationally competitive research funding.