A pre-planned and delayed exchange of a PhD Student contributing to the ENeRAG project was organized in order to gain insight into the highest quality mineral exploration research, through trace elements and stable isotope geochemistry. Both single-collector and multicollector LA-ICP-MS were used by Máté Biró (3rd year PhD Student, ELTE) to build a database from the trace elements and isotopic compositions of the sulfide phases of the complex hydrothermally mineralized porphyry stock originating from Recsk, NE Hungary. With this purpose, Máté spent nearly 50 days from the 9th of October, until the 25th of November in GTK Circular Raw Materials Hub laboratory in Espoo, under the supervision of Hugh O’Brian. 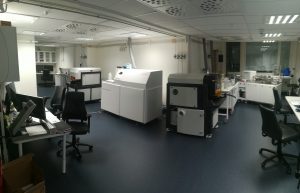 During his stay, Máté had a chance to perform both vast amounts of sulfide trace element measurements and δ34S isotope measurements for his PhD thesis. Another achievement targeted by this exchange was to acquire fundamental knowledge on modern-day academic mineral exploration methods and transfer this knowledge to Hungary so that it could be funneled into education and research. Both trace element concentrations and sulfur isotope ratios can be used for vectoring within complex hydrothermal systems, such as Cu-porphyry deposits.

While trace element measurements and data evaluations were performed under the supervision of Hugh O’Brian, measurements of sulfur isotopic compositions were overseen by Yann Lahaye. 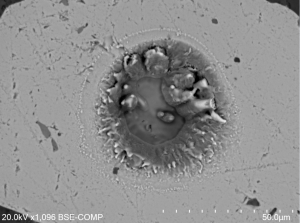 Ablation pit with residues of molten and re-solidified pyrite sprays

By participating in the complex sample preparation and measurement routine developed by  GTK, Máté could improve his skills in instrument and data calibration techniques, data evaluation and interpretation, with the use of automated learning methods. Interpretation of the data was implemented with Glitter, iolite, and ioGAS software. For background information on the software, and better information retention, Máté attended a lecture by, GTK expert Sara Raic on data evaluation processes, and the mathematical background of geological data evaluation.

This exchange is a great example of cooperation in education and research, and the results will be published in a joint paper, which may also benefit the recognition of Hungarian geosciences, as well as resource potential of already known deposits, such as the one at Recsk, Hungary.