ENeRAG was present again at the largest and most prominent hydrogeology-related worldwide event, the 48th IAH Congress (6-10 September 2021, Brussels, Belgium).

The motto of the 48th IAH conference was:

“research inspires us to turn challenges into opportunities, and to make groundwater part of the solution towards a society without fossil energy sources”.

ENeRAG supported the participation of 4 researchers from ELTE  and 1 researcher from UMIL, who presented their research on 4 different topics (Managed aquifer recharge, Hydrogeophysics, Hydrogeochemistry and Geothermal and hydro-energy).

Zsóka Szabó, PhD student gave an oral presentation with the title of “The Impact Of Topography, Geology And Local Hydrogeology On The Efficiency Of Managed Aquifer Recharge – A Case Study From The Danube‐Tisza Interfluve, Hungary”.

Petra Baják, PhD student also held a talk related to her research topic with the title of “Hydrogeological Investigation Of The Radionuclide Content In Groundwater In The Vicinities Of Two Crystalline Outcrops In Hungary”. 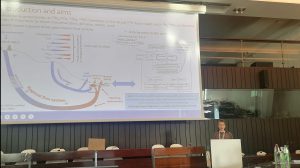 Ádám Tóth, assistant professor, introduced his research findings to the audience on the topic of “Role Of Basin Interplay In Geothermal System Operations”. 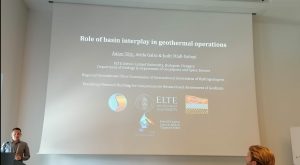 Andrea Citrini, PhD student at UMIL also presented his work on “Characterization of the main karst aquifers of the middle Valseriana (Northern Italy) based on isotopic and hydrogeochemical data: Nossana and Ponte del Costone springs”.

Besides the inspiring plenary lectures and interesting discussions during the oral and poster sessions, many social events were organized in order to facilitate networking, such as the Ice-Breaker Party, Grand opening, RUN FOR WATER – Cultural jogging and Gala Dinner. 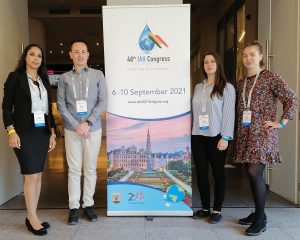 ELTE participants at the IAH Congress in Brussels

Besides these, participants had the chance to attend the IAH General Assembly and the different IAH commission meetings as well. On Wednesday various interesting field trips were organized through Belgium. The ELTE Team members attended a field trip in Spa and visited the famous Spa water bottling factory and learned the hydrogeologic characteristics of the source region. The candidate of UMIL visited the Rochefort area and its Devonian limestone fractured and karstic aquifers.

It was a great pleasure and a huge success for us that this year the scientific coordinator of the ENeRAG project, Judit Mádl-Szőnyi received one of the most prestigious awards of the International Association of Hydrogeologist, the IAH Presidents’ Award in the framework of the Congress.

The IAH Presidents’ Award was established in 1995 and is determined by the current and past presidents. It is given annually to a member who has made outstanding international contributions to groundwater science and furthering IAH’s mission to promote understanding and management of groundwater resources for the benefit of humankind and the environment.

In her acceptance speech, Judit said the following:

“I was pleasantly surprised when I learned that I am being awarded one of the most prestigious awards at IAH in 2021. I have always worked on the subject that I have been passionate about, believing that I can help people better understand groundwater flow systems and their operations.”

Due to the high importance of the event and to a large number of participants, the 48th IAH Congress was an inspiring and considerable opportunity to represent the ENeRAG project, and to engage in networking, to broaden our network, to increase the level of dissemination of the ENeRAG and to exchange research ideas. 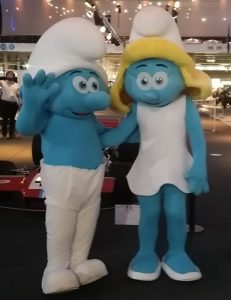