Originally the 47th IAH Congress would have taken place in Brazil, São Paulo from September 20th to 26th, 2020, however, the pandemic made it impossible to hold the face-to-face event. The circumstances motivated the organizers to adapt and after a long period of waiting, they decided to hold the Congress in a fully digital format, which eventually happened between August 22nd and 26th, 2021.

The main theme of the event was

The online platform of the conference

ENeRAG supported the participation of Ádám Tóth (assistant professor of ELTE) who had a talk on “Basin-scale Characterization of Geothermal Resources in Convection Dominated Geothermal Plays” in the session of Groundwater, Energy and Climate change.

In his presentation, Ádám drew attention to the issue of the proper scale of study in hydrogeologic-geothermal research. The application of basin-scale models in a preliminary geothermal potential assessment would be beneficial for understanding heat distribution, and basin interplay and the rejuvenation of geothermal resources could be evaluated. A conceptual, generalized and simplified model of groundwater flow and heat transport can support the identification of prospective areas in the reconnaissance phase.

Despite the online format, the event could create a real opportunity for knowledge exchange and network as well, like the round-table discussion sessions focusing on the current topics in hydrogeology. Not to mention that the presentation of Ádám in such a big and worldwide known event increased the level of dissemination of the ENeRAG project as well. 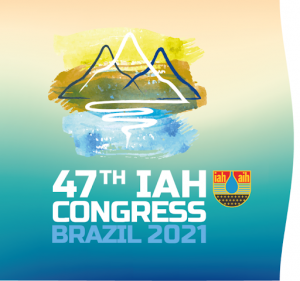