On 10-11 September 2021, two young researchers from ELTE represented the ENeRAG project and gave awarded presentations at the 51st Meeting of Young Geoscientists in Zalakaros, Hungary.

Her study aims to understand the cause of the elevated radioactivity in drinking water in the vicinity of the Velence Hills. In the research a complex hydrogeological and geochemical approach, involving nuclide-specific measurements were applied. It was revealed that the oxidising characteristics of the predominant recharge areas and local flow systems are favourable for uranium mobilization in the regional-scale. As a conclusion it was stated that, groundwater flow systems beside aquifer geology have to be taken into consideration if dealing with the excess of radionuclides in groundwater-derived drinking water.

For her presentation, she was awarded second place in the applied category. 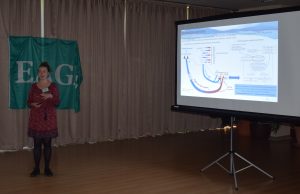 Petra Baják presenting her work at the conference

Ábel Markó (PhD student) also had an oral presentation with the title of “Approach to understand and avoid injection related problems in geothermal systems”.

The aim of his study is to understand and be able to avoid injection related problems during geothermal utilisation. A concept was proposed and a workflow was presented covering various scales ranging from regional hydraulics and reservoir scale properties until the local clogging processes. First the workflow was tested on a geothermal site (Mezőberény, SE Hungary) suffering from reinjection problems; and revealed insufficient reservoir performance and biological clogging processes as reasons for low injectivity. Understanding and avoiding the problems contributes to an efficient and sustainable geothermal use.

For his presentation, he was awarded third place in the applied category.

Ábel Markó presenting his work at the conference

Attending the conference added additional experience and practice in presenting in front of an audience and jury to the young researchers of ELTE. Moreover it was a great opportunity for networking and also for knowledge exchanges among the young researchers and the senior members of the jury. Not to mention that on this occasion ELTE could increase the level of dissemination of the ENeRAG project as well.