The ENeRAG project successfully hosted its most significant scientific event, the International Symposium on Geofluids. The largest and most anticipated event of the project was held virtually between 7-9 July 2021. The main objective of the Symposium was to bring together scientists, professionals, and stakeholders to share and discuss all kinds of topics in geofluids, and especially groundwater, to highlight the interaction among geothermal energy, hydrocarbon, geogenic contamination and hydrothermal mineral resources.

The international Symposium was organized by the ENeRAG H2020 project in collaboration with the Eötvös Loránd University (ELTE), the József and Erzsébet Tóth Endowed Hydrogeology Chair Foundation. The scientific objectives of the event were supported by the Regional Groundwater Flow, the Managed Aquifer Recharge Commissions and the Hungarian National Chapter of the International Association of Hydrogeologists (IAH), the MOL Group and the Water MDPI Journal.

The event was officially opened by Enikő Katalin Magyari, Vice-Rector for Research at ELTE, who emphasized one of the main elements of the ENeRAG project, the importance of networking, which is closely in line with institutional objectives as well.

“Institutional networking is a key element of this project that also meets the aim of the university to increase the number of EU networking grafts and bring in know-how from more developed European Union member partners.”

Imre Kacskovics, Dean of the Faculty of Science of ELTE, also welcomed the audience at the opening event, who emphasized the role of the Symposium in introducing the versatility of regional water flow theory.

“This geofluid symposium ……. highlights the significance of the regional groundwater flow theory.”

Teodóra Szőcs, Vice-President of Finance and Membership of the IAH, emphasized the importance of the geofluids systems in sustainable water management and adaptation to climate change as one of the most pressing problems nowadays.

“Due to climate change, climate adaptation strategies are needed more widely, not only in arid or semi-arid regions to facilitate a sustainable (ground)water management.”

Marco Masetti, representing the University of Milan (UMIL), the partner institution of the ENeRAG project, drew attention to the urgency of the water crisis, the indispensability of fresh water and its key role in the European Green Deal.

“The water crises highlight how water, as the most relevant geofluid on the Earth, is an essential asset also for achieving the European Green Deal in many of its policy components.”

Ferenc Molnár, on behalf of the Geological Survey of Finland (GTK), said that within the GTK, the ENeRAG project serves as a modelfor similar twinning projects.

Judit Mádl-Szőnyi, symposium chair, scientific coordinator of the ENeRAG project, presented the scientific background and aims of the event. She emphasized the focus of the Symposium:

“Fluid geology has been gaining increasing attention compared to traditional solid geology. We need, however, to advance our understanding on fluid-rock-related processes, on different geofluids and their interrelationship. For this reason, emphasis should be put on the dynamics of the fluid flow systems and the geological effects of fluids in the lithosphere.”

The symposium featured 40 live lectures and 28 poster presentations on 5 topics. The audience came from 26 different countries who actively participated in the follow-up discussion.

Main Topics and Sessions were: 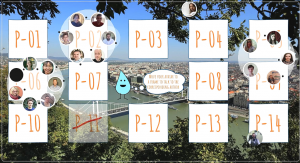 The standard of the event was elevated by the presentation of5 internationally renowned keynote speakers(Inga Berre from Norway, Xiao-Wei Jiang from China, Niels Hartog from the Netherlands, Vincent Post from the Netherlands, Daniele Pedretti from Italy) who shared their forward-looking and high-quality research findings with the participants.

Interactive workshop was organized within the framework of the event, where Judit Mádl- Szőnyi, Brigitta Czauner and Ádám Tóth, members of the hydrogeological research group of ELTE, demonstrated thedynamic systems approach, involving the audience with thought-provoking questions. 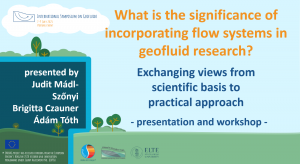 The symposium also included social events, where participants were able to get an insight into the mysteries of the Hungarian cuisine with a cooking competition held within the framework of the virtual gala dinner, as well as they were able to visit the streets of Budapest and get acquainted with the diverse architecture of Hungarian capital during a virtual sightseeing tour.

The symposium was closed by Judit Déri-Takács(event hostess), Ildikó Erhardt(organizing chair) and Judit Mádl-Szőnyi(symposium chair), who thanked all participants, committee members and organizers for their participation and excellent work.

“The topic of geofluids connects all of us arriving from different backgrounds, professions and various stages in our career. We could learn that the understanding of flow systems and the dynamic system approach can be the key to formulating new scientific questions, and to finding solutions to theoretical and practical environmental issues.” 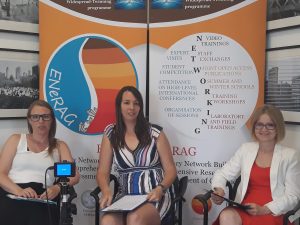 Contributors to the successful organization of the event:

Thank you for their tireless support! 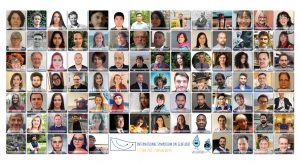