The workshop on knowledge transfer for modelling shallow bedrock energy utilisation held online between 23-25 March 2021 attracted participants worldwide, most of which have been also active during the lecturing time as visible from the following diagram. 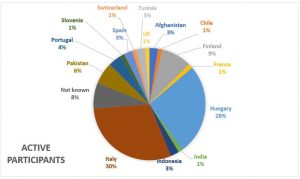 Teppo Arola from GTK has opened the workshop showing the Finnish and European trends. The teaching activity opened with the theory and principles of shallow bedrock energy, highlighted the geothermal processes in different geo-environments, and explained heat transfer’s methods and techniques with GTK lecturer Lasse Ahonen. 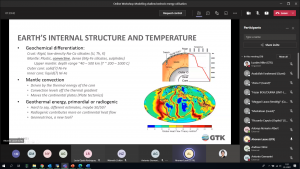 The workshop continued the second day with geophysical measurement tools for modelling, including bedrock borehole temperature measurement with DTS (distributed temperature sensing) methods and thermal response test (TRT) with Annu and Ilkka Martinkauppi lecturers from GTK. A video had been prepared in order to show the activity on site. (https://www.youtube.com/watch?v=6dyDarVc-dA ) . The methods used in Finland differed from those of other European countries because of the different environments and bedrock where it is applied. The sessions have risen also discussion about equipment and costs involved. 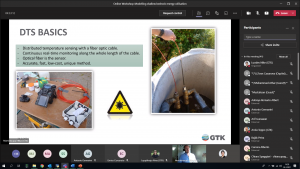 On the third day, Nina Leppäharju (GTK) addressed planning and optimisation of shallow geothermal systems showing how to design shallow geothermal systems and how specific tools and software (Earth Energy Designer (EED) as an example) work. Participants have been interested in tools accessible by students by free and open data. She continued teaching how to design a borehole heat exchanger for a single-family house and ended illustrating how to optimize the borehole heat exchanger field. 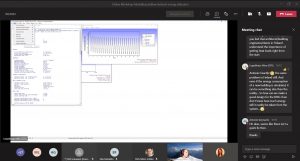